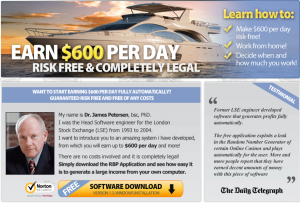 Roulette Bot Plus is a widespread scam that is often promoted via pop-up windows like this one to the right, as a free and easy way to make money on the Internet (click on it to view an enlarged version).

“Dr. James Peterson” is nothing but a fictional character and the respectable, businessmen like face that you see in the ad is a stock photo. I wonder if he’s aware that his face is being used as part of a get rich quick scam?

When you land on the RouletteBotPlus.com website you’re told that users have earned $9,400,000 using the program and that it’s your turn to get in on the action. There’s also a professionally made YouTube video which has a friendly sounding woman’s voice – perfect for enticing people. The author obviously forgot to disable the likes/dislikes on the video because just look at the amount of dislikes the video has:

I haven’t seen this proportion of likes to dislikes since Rick Perry’s doomed presidential campaign. The amount of dislikes the video has should tell you everything you need to know about this program, but we shall continue with the review.

It is a free, automated software program that plays all by itself, hands free once you’ve set it up. The authors claim in the promotional video that it “has a unique algorithm analysis technology” but it is nothing of the sort. Roulette Bot Plus is a sleeper system which basically means that it will bet on certain sections of the wheel when they haven’t hit for a few spins and then use risky Martingale progressions. For example, it will bet on Red when there’s been 6 Blacks in a row and it’s a similar story for the rest of the bets.

These kinds of systems do NOT beat online roulette because sooner or later you’ll get 15+ losses in a row which will completely wipe out your bankroll or push you up to the table limits, meaning you can no longer increase your bets. The system Roulette Bot Plus uses has absolutely no hope of winning long term, it just doesn’t work.

Why Would They Go To All Of This Trouble? Where Is The Scam?

You’ll notice that within the program there are links to download casinos where they claim their program works. Every time someone signs up to the casinos via these links, the Roulette Bot Plus owners are paid a commission. The whole thing is an elaborate and well promoted scheme to entice people to sign up at casinos under the false promise that they will be able to win easy money.

But distributing a software program that they know full well will lose, with the promise of easy money and jumping on board the $9,400,000 gravy train? That is not an honest method of promotion and that’s what makes Roulette Bot Plus a scam.

They claim that their program is free because they make money from donations, and of course, there’s a link to donate money to them. Apparently, over $280,000 has been donated to them and 81% of users donate regularly.

I don’t doubt that a few people have downloaded the program, won some money in the first half hour or so, jumped the gun and made a donation. But 81% of users donating regularly? No chance. The only purpose these figures serve is to persuade unsuspecting victims that the program works and happy users are donating regularly.

This scam has been going on for a few years and even now in 2016, we’re receiving more complaints about Roulette Bot Plus than any other system reviewed on this website. It is a quick and easy way to lose money, not win it.