Sometimes when you search online for information about a roulette system, you will find video testimonials raving about how great the system is. In a lot of them, they go on about a recent trip to Vegas and how much they won, blah blah blah.

Problem is, the biggest majority of these testimonials are fake either from an affiliate of the system in question (we’ve already featured one of these in our Roulette Sniper review), or they’re paid for and the person doing the testimonial has no idea what they’re talking about, hence why they go on about a “win in Vegas”.

If you do a simple search online for “buy testimonials” you will see dozens of websites where you can buy fake testimonials. What’s sad about this is the money that’s involved; the people that make these fake video testimonials are barely paid enough to buy a meal from McDonald’s. They’re obviously very desperate for money if they’re prepared to sit in front of a camera and talk complete rubbish about products they know nothing about.

Below, we have just a few examples of roulette system testimonials that are very clearly fake. There’s far too many of these kinds of testimonials to list them all, but these give you a very good idea of what to look for.

This is the same guy we featured in our Roulette Sniper review. In this video, he claims that he decided to “add another car to his collection” and that “life could not be better”. It then shows him sat in a Porsche (still in the grounds of the dealership – you can see other cars for sale in the background) and he claims to have “just taken delivery of this fantastic Porsche 911 Turbo”.

The thing is, any car fan with a beady eye will notice that the car isn’t even a 911 Turbo. To go to such lengths and tell such blatant lies to try and generate a few Roulette Sniper sales is just pathetic.

Not Lost Once, Anyone Can Make Money? 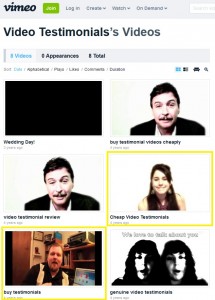 These are just two of many reviews for a system called “Professional Roulette System” which was launched in 2010, complete with dozens of testimonials. Every single one of them was paid for, most of which from a now deceased operation called “BuyVideoTestimonials.com”.

You can see the remains of their sales material on the video sharing website “Vimeo”, click on the screen shot to the right to see for yourself, complete with the man and the woman in the videos above advertising how you can buy a testimonial.

If you want to see these sales videos for yourself, head over to the Vimeo.com website and do a people search for “Video Testimonials”.

This is another guy talking about how great Roulette Sniper is. In the video, he talks about purchasing loads of systems, nothing ever working until he found Roulette Sniper and that he’s made thousands of dollars using it.

He then says that it can work for you too and that if you want to get in on the action, you simply need to click on the link in the description (when watching the video directly on YouTube) to check it out for yourself.

He will then get a commission for anyone that goes on to purchase Roulette Sniper after clicking on that link. We really don’t understand this mindset when he’s making these videos. If he wants to make video testimonials and earn commission and some money on the side then fair enough, but why sit and talk rubbish about a scam that isn’t going to work? Why not talk about real products that are actually useful instead? Amazon is full of great merchandise with the potential to earn commission on sales.

Two more in the long list of “reviews” for the “Professional Roulette System”. The guy on the left goes on about living in Las Vegas and showing “7 or 8” friends from out of town how to win at roulette when they came to visit and all of them left the casino as winners. The guy on the right has a story about him and his cousin using the system to make “crazy money” and that it’s easy money for anyone.