The Martingale has been used as part of scam online casino promotions for many years now. First, let’s get the basics out of the way. The Martingale is an old system which requires the player to place a small bet and then increase bets after every consecutive loss until they win.

It is usually applied to the colours (Red and Black) where it’s known as the double up method because you start out by picking a colour, bet £1 on it and then double every lost bet until you win, at which point you go back to betting £1. It can be applied all over the table providing that the correct progression is used and the previous losses are always covered by a win.

You can read about the system itself, the progressions, the odds and why it’s NOT a long term winner on our detailed page on the Martingale. The system itself is not a scam but the way in which some websites write about it and promote it is certainly a scam.

Examples Of The Scam

Some websites will promote the Martingale system as an easy and guaranteed way to make money on the Internet that anyone can use with no experience required. They will then make several claims to entice the reader and convince them of the legitimacy. Here are some of the common examples:

Quite often, these claims will often be accompanied by pictures of fast cars, cash, big houses, luxury holiday resorts and all the other stuff that you’d expect to find on a get rich quick scam website.

They will then give you a list of casinos that can be “exploited” using the system and that right there is the scam. They’re tricking people into signing up at the “exploitable casinos” under the illusion that they have a winning system that will earn them money

The actual system they give you is always one of three things:

3). Some elaborate websites give you a free software program that they claim can win cash automatically from the “tested casinos” that are found within the software. Roulette Bot Plus, which is a very widespread scam, is a prime example.

To further convince you of the legitimacy of their claims, they often tell you that the Martingale is banned from casinos and that you need to keep your winnings at around £150 per day to avoid detection and that you should play at several casinos to spread the winnings out.

Some even go to the length of providing a list of casinos with a few of the links “crossed out” because the casino no longer works. See for yourself in this screen shot which was taken from a scam we wrote about called Roulette Exploit: 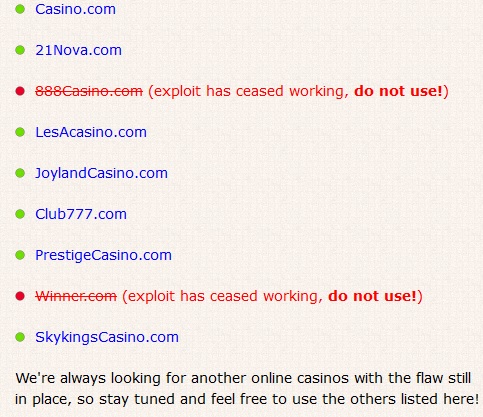 There’s no way of softening the blow on this so we’ll just come straight out with it; long term success stories with the Martingale are few and far between. With online casinos, Red and Black can easily go 10 spins or more without winning and Dozens can go over 30 and when this happens, the Martingale loses, and it loses big. All these claims about flaws and exploits are complete rubbish to lure players in, nothing more.

We’ve written about several of these scams such as the already mentioned Roulette Bot Plus and Roulette Secrets Uncovered. If you’ve been fooled by one of these websites, get in touch and tell us more about it.

Something else that we should point out is that getting 10 Reds in a row when you were betting on Black does not mean that online roulette is rigged. While it’s unlikely, the odds of losing 10 consecutive spins on European roulette when betting on a colour are as follows:

A 1 in 784 occurrence is rare but by no means impossible and when you’re playing over thousands of spins, it’s bound to happen sooner or later. It happens because the odds dictate that it will happen, not because the casino is rigged. Believe it or not, roulette wheels in Las Vegas sometimes have 10 or more colours in a row as well. This is roulette, losing streaks and streaks of numbers/colours happen in both online and real casinos.

Is It Even Possible To Win At Roulette? Is It All A Scam?

It’s certainly possible to win at roulette, providing that it’s your lucky day. We’ve quite literally seen someone win £40,000 playing roulette at William Hill during a single session. The thing about this win is that the player wasn’t using any set strategy or exploiting flaws – they were simply betting big and got lucky.

That’s what you need to remember about roulette – it’s all a game of chance. Sure, there are strategies that you can use to manage your money, but wins are reliant on luck, despite what websites that talk about flaws and guaranteed systems tell you. See our roulette system reviews for more information on those.