RouletteNumber.com is a very carefully designed website, with the goal of tricking roulette players into thinking that they’re getting a software program that can win at roulette long term and generate large sums of money. The website tells you exactly what you want to hear with promises of long term winnings, complete with videos and screen shots showing large withdrawals from online casinos. More on these lower down.

When you add the amounts together from these videos and the screen shots, the total is way over £100,000 that has apparently been won with the software. Couple that with the claims on the Roulette Number website such as “lucrative long term winnings” and “proven countless times” and the only conclusion that you can arrive to from reading the material is that this is a long term winning system. Sadly, the software does not get close to meeting the high expectations set out by the website sales material. Let’s get into the software in more detail.

It is an automated software program, meaning that it places bets all by itself once you’ve set it up. It bets on one single number at a time and then uses a Martingale Progression after each loss. According to the Roulette Number website, it bets on a 185 step progression and you would need to lose “a staggering 185 times before your bankroll is gone”.

Inexperienced players may look at this claim and think to themselves: “Oh my God he’s right; losing 185 times in a row is staggering. It must be a great system!” To anyone with experience however, it’s an idiotic claim. The seller says that the software bets on a number and does not deviate until it wins – it keeps on betting on the same number. Here are the odds of the number you’re betting on not hitting for 185 consecutive spins on European Roulette.

As you can see, 185 consecutive spins without one number hitting is not “staggering” at all. It’s much more likely to happen than other common reasons for Martingale systems losing, such as betting on Red and losing 10 in a row which is a much further long shot at 1 in 784 chance.

If you want further proof that 185 spins without a number hitting is a common occurrence, download the free trial from either Roulette Assault or Roulette Bot Pro, set them to run in test mode on a real money Playtech roulette game with a “sleeper single” system and you will see it for yourself.

Not only will you see that 185 spins is common, you’ll see that single numbers regularly go 300 spins without hitting and sometimes over 500. When that happens, Roulette Number will lose all your bankroll and any money you won along the way.

Something else that Roulette Number don’t point out is that after it has lost 185 times in a row, the total loss will be over 500 times the original betting amount. So if your starting bet was 10p (as they suggest), it would lose over £50 in total over the span of the 185 spins once the Martingale progressions have been added up. Ouch.

To try and get around this, they suggest playing at casinos that have 1p chips so that you can increase bets from 10p to 11p then 12p and so on as opposed to 10p to 20p. This does result in a smaller losses and it won’t lose 500 times your original bet over 185 spins, that’s the upside.

The downside is that this “safer” progression does not magically put the odds in favour of the player and after just a few losses, you will find that the software is betting pounds to win pennies. Even in the “winning video” on the Roulette Number website, you’ll notice that midway through it has 74 consecutive losses and it wins on the 75th spin.

Through these 75 spins, a total of £11.53 is wagered and the profit when it eventually wins is 35p. Does risking £11.53 to win 35p sound like a good bet to you? And that’s after 74 losses in the first 5 minutes of play. The amount the software will be betting and risking over the long term of play and after 185 losses is much higher and it will still be to win a few pennies.

This is where Roulette Number, in our opinion, becomes a scam. Great effort has been put into creating videos and screen shots which as pointed out higher up, show earnings in excess of £100,000. It’s only fair that in an upstanding society, if someone is presenting these screen shots and videos as proof, alongside claims such as “lucrative long term winning”, purchasers can’t be blamed for expecting similar results, right?

It shouldn’t surprise you to hear that faking screen shots and videos is not difficult. Screen shots are very easy to edit in programs like Photoshop and “live videos” are also easy to edit with either JavaScript code or browser plugins which are used to edit live websites and then all of the editing is cleverly cut out to create a seemingly flowing and convincing video.

Are the withdrawals and screen shots on the Roulette Number website fake? It’s impossible to say for sure, but if you watch the Betfred video with “£50,000 in 6 months”, you will notice suspicious teleporting of the mouse at the 55 second mark.

What’s 99% certain is that even if the screen shots and withdrawals are legitimate winnings, they weren’t achieved with the Roulette Number software and were achieved by other means entirely. I say that based on the high risk for low reward betting, the long term tests we’ve done in real money mode at Playtech casinos in which we’ve seen how frequently single numbers sleep for 300+ spins, and the relatively low odds of losing over 185 bets in a row.

Couple all of that with the numerous complaints about the software on rouletteforum.cc, rouletteforum.com and YouTube (see below) and we’re left in no doubt whatsoever that Roulette Number is a cleverly designed scam, designed to entice players with all of the “proof of winnings” and the promise of a low risk system.

If you go on the purchase page, you’ll notice that the price for the full version is $267, but there’s an offer that’s only valid until Sunday with savings of over $200, better hurry before the offer expires! Or, alternatively, you could just come back next Monday and find that the “offer expiry” has updated. It simply updates automatically every Monday morning. 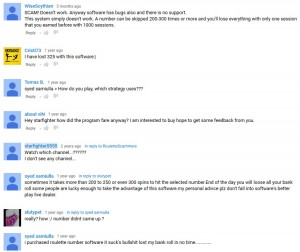 If you’ve seen the Roulette Number videos on YouTube, you’ll have noticed that there’s no comments on any of them despite the fact that collectively, they have hundreds of thousands of views. How odd.

However, other people have made videos of the software and numerous customers have expressed their displeasure with the system and left complaints in the comment section, so I shall round this review off by showing just some of them. Click on the image to the right to see the full size version and read them for yourself.